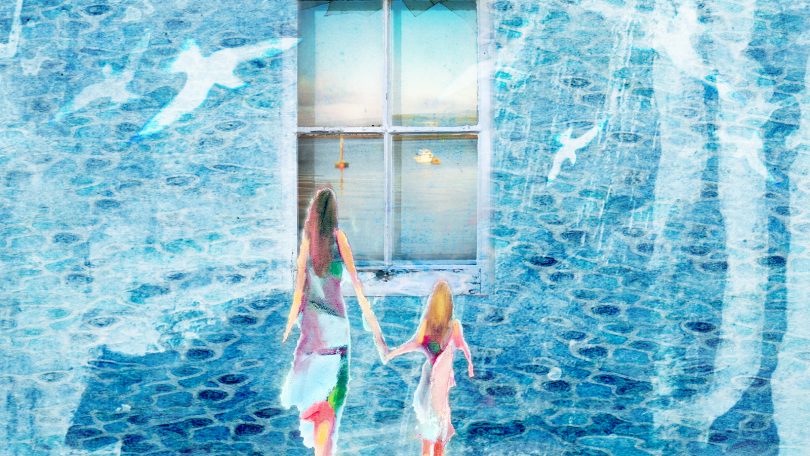 For there to be a hot day in Orkney the wind must die down, a rare occurrence.

On such a day another rarity occurs – a warm sea, but only where the exposed sand of the ebb is heated by the sun and the incoming tide is slowly warmed – this happens at Waulkmill, a narrow bay where the sea is shallow for several hundred metres.

Elsewhere the sun can be blazing but the sea is icy cold, as many an unsuspecting tourist finds to his cost.

On hot days plastic gutters creak and tarred roofs melt and reseal. Indeed it’s a good day to tar a roof – the tar flows off the brush like syrup.

Flagstone-roofed cottages often had a heather thatch on top of the stone to stop the big flags cracking in the sun.

Stone heats slowly but it also cools slowly – if you are late to the beach on a sizzling day the stones feel hot to touch, and as the cool of evening approaches, the stones give off a friendly warmth.

Orcadians rarely get to wear summer dresses, shorts or sun hats, but they must keep them somewhere because on a hot day a few brave souls emerge pale-legged onto the street or the beach. Like forgotten lovers, insect repellent and sun cream languish at the bottom of medicine chests; sunburn is frequent, a lesson never learnt. Hoverflies, bees, midges, who seem to have hidden away all year, appear in abundance.

Midges are generally not a big problem in Orkney, except in Hoy, where heather abounds, and usually only then if there is a still day. With the wind any strength at all, if you can stride purposefully into it, problem solved, their wee wings cannot keep up.

Trees harbour midges too, and the lack of trees could be put down to our neolithic forebears figuring this out and felling the lot.

Once on a hot day in Sweden a friend drove us into the forest for a walk. As I got out of the car I could hear a high-pitched singing noise. I was immediately swooped on by giant clegs or horseflies. In fields cut out of the forest dairy cows were grazing – they must have suffered terribly. Our livestock, thanks to the wind, has a much easier time.

Small bodies of water, puddles and shallow ponds can dry up, the mud forming a crazy-paving pattern, that is replicated on the flagstone outcrops at the beach – millions of years ago, a mud-cracked lake bed was somehow preserved in our rocks, evidence of ancient hot days.

On a hot clear day, flying low out to the islands you can see right down through the turquoise water and, if you are lucky, you will spot the sinuous black shape of a seal swimming over the white sand.

Dazzling white, terns wheel, screkking over their chicks panting in the heat.

Hot weather does not always give the best visibility.

In slightly dull weather, from certain locations, you can see a long way – from Yesnaby cliffs to Morven in Scotland, from Wideford Hill to Dunnet Head, from North Ronaldsay to Fair Isle; but on a hot day the islands float above the sea shimmering, mirage-like. Beyond them a heat haze builds over the ocean that fuzzes the blue horizon.

The land heats faster than the sea, and after a day or two of heat a south-easterly breeze will bring the cooler sea air in contact with warmer land.

You can be sitting on an Orkney beach sunning yourself when before you know it, the sun disappears, the haar rolls softly in, and you begin to shiver in your thin top and shorts.

Some of our plants are resistant to drying if not heat. The wind can dry as well as the sun, and many plants have fleshy or leathery leaves, but few if any of our animals, except us humans, show adaptation for heat such as hairlessness or bigger ears.

How do we, the one animal adapted for heat, cope with the lack of hot days?

We make use of the four C’s – clothes, central heating, cars and conservatories. You don’t see many naked humans nor near-naked humans in Orkney, even on the beaches. Indeed, people are well happed up. For me, padded boiler suits are almost national dress, while women’s wardrobes contain more warm clothes than their southern counterparts. A before-central-heating yarn no doubt, but there was that apocryphal story that Orcadians would sew themselves into their long johns in November and not take them off till May. Today, if out of the house, Orcadians rarely stray from their cars – there are nearly two cars for every household and at outdoor sports events, car-borne spectating is common.

And it’s to the house that the modern-day Orcadian bent on getting more than the few hot days offered gratis by nature, turns. He builds a conservatory, or if that isn’t enough, goes on holiday to Spain – or does both.

Anything for a few hot days.