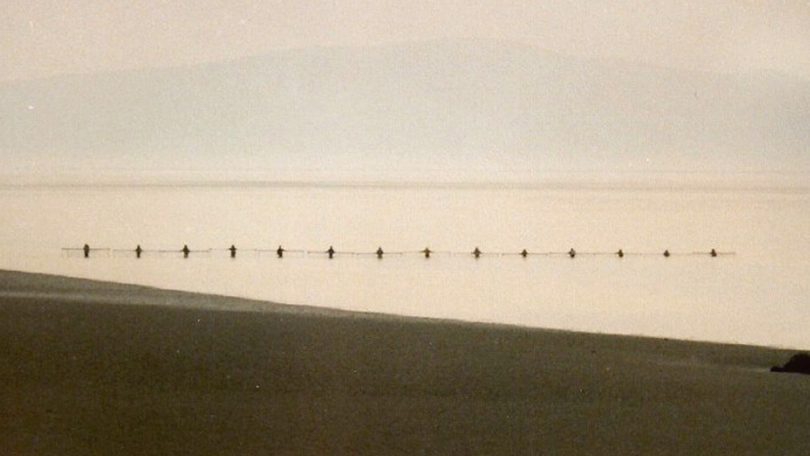 The haaf-net streams out behind us in the current, and Mark and I each have our fingers looped in its upper mesh, waiting for the tug or tremor that says we’ve trapped a salmon. Mark suddenly upends the haaf, swinging the frame up and out of the water to make a pocket of the net – a small flounder, which he releases. I hadn’t felt a thing, other than the tension of the tide. The water is chest-high now and the press of the water is strong, so we have to move; we wade slowly across the current to the landward end of the row. Mark is carrying the haaf and I wish I had the extra weight as I feel light enough to be knocked over and swept away with every step.

Earlier, my husband John and I had met Mark and his son Ben at The Highland Laddie, the inn at Glasson that Mark and his wife Karen have run for the past six years. Mark phones the Environment Agency to confirm that he is taking us out, “on the back of” his and Ben’s licences, and we set off to Bowness-on-Solway, past the remains of the viaduct that once spanned the Firth, to fish the “West ground”. I’m puzzled that we don’t have any nets with us in the car, but when we park I see why: the haaf-nets, lying on the grass at the top of the saltmarsh, are enormous. I ask Mark if it’s safe to leave the nets lying around, and he laughs: “Aye, though we’ve lost one or two to the cows – they’re a pain in the backside.” Tom Dias, who lives at Bowness and has been haaf-netting since the mid-1980s, told me later that he had had a net stolen in the early days: “Another time, four of the nets were stacked up together against the wall and somebody had taken a stanley knife or scissors, and cut right up through all four.” Haaf-netting has always had its opponents.

Now, kitted up and feeling as round and fat as Michelin-man, I follow the others down the shore. The sand is surprisingly firm, and oystercatchers are scurrying and probing at the water’s edge. Mark carries “our” haaf, but Ben – who has been muttering about the early start – kindly allows John to carry his; the large area of the net catches the wind like a sail and John is shown how to carry it horizontally. We keep on walking, straight out into the water. The tide is still on the ebb, and as we wade out Mark warns me, “You always need to keep an eye on where you are, look back at the shore,” because on a big tide like this, the deep creeks in the marsh could well be hidden by the water when we head back. Mark says we’ll fish a “hole” where the water is deeper, and John and Ben move further downstream – at this stage, haaf-netters work as individuals, seeking out the best currents and eddies. Some of the holes have names, Mark says, like Merry-go-round and Killing Hole, and as we talk I learn new terms like “drops”, where the sand banks up and spills over the edge, and fine Nordic-sounding names like “briest” – bank, and “reestings” – standing waves. We stand waist-deep near the drop and the net drifts then tautens, as the current swirls around the hole: “Think of it like a goldfish in a bowl –,” Mark explains, ” – the fish swim around the edges.”

Over on the Scottish side a group of netters are out in the water and a tractor is working on the shore, near the line of poles that support the stake-nets. Tom Dias tells me later that, “On the Scotch side there was a huge effort. There used to be a stake net each side of the viaduct, plus a two- or three-pocket net, and another three-pocket. And there were three rows of pike nets from the water up to the sands.” The fixed net system has all but died out on the English side, and it’s mainly on the Scottish “Liberty Ground”, owned by the Buccleuch estates, that a few remain.

Haaf-netting was introduced by the Vikings: the haaf’s beam is supposedly as long as a Viking oar, and has three uprights attached, with one end slightly shorter than the other. Most of the netters make their haafs, usually now of pine or “greenheart” rather than pitch-pine, and they usually buy their nets. “But there’re not many knitters left,” Tom says, “They’re few and far between. I used to get nets from an old chap near Carlisle but he’s retired. I made my own net once, and we mend our own. Mending’s harder than knitting, though, it gets you on the side of your hand.” The mesh-size is statutory, so also has to be carefully checked and maintained.

While we’ve been standing in the hole, Mark has been watching for signs that the tide is on the turn and now we can feel the current lessening; the net is drifting again, but we can also begin to feel the “stem” of the tide – as the flood-tide meets the outgoing water, the level and pressure increases. It’s time to get out of the water, and as we wade back to the sand we see that other netters are arriving. The Scottish netters too are back onshore.

I become aware of a distant roaring sound that isn’t just the wind, and see a line of black tipped with white out in the channel. The tidal bore is racing in; it isn’t high but it is loud, and soon there are reestings in the Firth, and the sea is creeping very fast across the sand towards us, rapidly filling depressions that I had scarcely noticed. The silent rise of this brown-frothed edge is slightly menacing.

There’s a saying, “If your net’s in the water you’re in with a chance.” There are now eight of us, and it is time to draw for positions in the “boak”, the line of nets. “We’re very democratic,” Mark says, and I hear this stress on democracy several times. One of the netters is nominated “baggie” – dating from the time when lots were drawn from a bag – and he will do the draw: he moves away and stands with his back to us. The others bring out their “priests” or felling-sticks – the small truncheons that are used to hit a fish on the head to kill it – and push them upright into the sand, then (because the baggie would likely recognise whose stick is whose) each man chooses a different stick as his lot. The baggie comes back, and pushes over the sticks, giving each a number. Whoever is “number 1” can pick his position in the boak. The men sling their bags over their shoulders, take up the haafs, and we wade out into the stream.

Tom Dias told me that, “Up to about 10 years ago, there might be 15 fellas out every day. You knew that you had to draw lots, so you had to go down at a certain time. You had to be down there four hours before High Water. If you were late for the draw you had to go behind the boak. But then people got greedy, and wanted to go where they wanted. People started tagging on the end – it went to pure anarchy. It was out-and-out greed, they were going down every day and would know roughly where the fish would come.” The spirit of camaraderie and co-operation had gone. But today, with the smaller numbers of netters, it seems to have been restored.

Initially, Mark and I are at the landward end of the boak, for which I am glad because suddenly the current is very strong, the bore is roaring, and everyone very rapidly upends their nets and hurries back to the sand. There’s laughter and joking, “Whose bright idea was that, then?” and we wait a while, watching the reestings and the rushing tide.

But then we’re back into the water, where the level is rising quickly; each netter peels off from the seaward side one by one as the water reaches his chest, back towards the land. There is a flurry as someone nets a salmon; he upends his haaf, and after killing the fish with his felling-stick, pushes it into his bag. Clumps of weed trapped in the net are shaken free in a shower of sandy fronds. We alternate between standing with the haaf pressed against us by the tide, then pushing across to new positions, the line re-forming constantly, rain and spray in our faces.

But I’m dry, inside my waders and waterproofs; I’m warm, in my thermals and layers of fleeces – and I’m exhilarated to be in the Solway, not observing from the margins. I’m part of the three-dimensional complexity of the flowing tide and what it bears, and I’m practising (rather unsuccessfully) the ancient technique of haaf-netting.

You can see more of the haaf-netting on the Solway in a 30-minute documentary, filmed and directed by Jim McMichael, which follows the netters on the Scottish side of the water.

The full version of this story can be found on Solway Shore Stories.

More about Ann Lingard can be found on her website.

Ann Lingard (aka Ann Lackie), formerly a research scientist and academic at Glasgow University, is a novelist and writer of short stories and non-fiction. In additon to the ongoing Solway Shore Stories, her two most recent non-fiction projects have been at the ESRC Genomics Forum and the Department of Psychology in Edinburgh. She lives on a small-holding, looking across the Firth towards the Dumfries and Galloway hills.