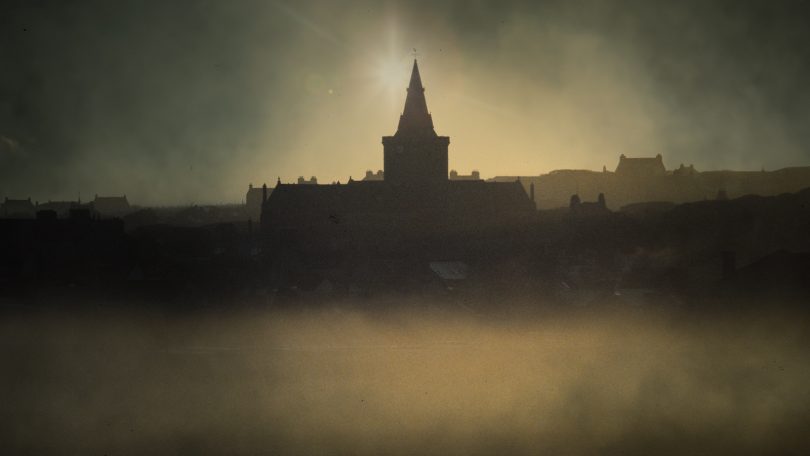 For Kirkwall the twelfth century opened auspiciously with royalty the theme, and it was only by a caprice of life and history that it did not remain the centre and capital of a royal domain.

All will recall from the Orkneyinga Saga or from Heimskringla how King Magnus Barefoot came to Orkney in 1098, deposed the Earls Paul and Erlend, the sons of Earl Thorfinn, and set his son of nine years as king over Orkney. The young King Sigurd ruled his Orkney kingdom until 1103 when his father died, and he then returned to Norway and to greater things. Well-known are Sigurd’s later exploits throughout Europe to Constantinople and the Holy Land, and the fantastic wealth he gained; and which goes to show what he might have made of Orkney and his capital town of Kirkwall had the islands remained his kingdom and the centre of his operations.

However Kirkwall was also destined for greatness in the twelfth century.

With the beginning of the century Kirkwall had reached full town status with a constitution and its own bylaws based on the old bjarkoyrett, i.e. the special laws that had developed by use and wont of rules and regulations governing trade, shipping and marketing, as well as the normal administrative function of a town and the rights of the inhabitants both permanent and temporary.

Bjarkoyrett was not a general code of law that applied to all Norse market towns, but was instead a particular town’s interpretation of the laws of that part of the country. Kirkwall’s bjarkoyrett, or bylaws, would have been the Old Orkney Law in so far as it could be adjusted and altered to suit the special needs of the town. The bylaws could also be made to apply to connected enterprises outwith the town – trading voyages, fishing-grounds, herring-stations, and the like.

The town had its own court, and dealt with all cases, civil and criminal, within the town’s takmark. Before the Cathedral was erected the court took place, like all other town meetings, at the old thing-mound. The court was fenced by twelve householders possessing land over a certain value, and the leader or chairman was the gjaldkeri.

No satisfactory translation can be given for the name gjaldkeri, perhaps because that official’s role changed fairly rapidly in the twelfth century, and the name did not survive into later history. However, he obviously was the key person in the administrative development of the town. The name as originally applied belonged to a sort of ‘king’s steward’ responsible for collecting all taxes and dues that accumulated in the natural functioning of the market town. When with the passing of the years the town was able to exert a degree of independence, the gjaldkeri became the chosen leader of the householders themselves, and the town’s treasury no doubt got a greater proportion of the dues collected.

Kirkwall’s gjaldkeri was most likely someone from the nobility, for the position was clearly regarded as a great honour. Solmund Sigurdsson, a close companion of Earl Rognvald Kolsson, and a hovding with rich estates and a large following of men, was the gjaldkeri of the lesser market town of Tonsberg. When Earl Rognvald gained full control in Orkney, he would certainly have installed in Kirkwall a gjaldkeri of similar standing and quality as his friend Solmund. As a matter of fact, Solmund accompanied Rognvald to Orkney, and before returning to Norway he probably gave advice on the question. For to bring Earl Rognvald’s and his father Kol’s cathedral plans to fruition a well-established town organisation was essential.

The government of Kirkwall in the twelfth century, with the gjaldkeri and his twelve advisers, was basically the same as that under the provost and councillors which we still had less than 20 years ago. When dissolved the Kirkwall Town Council had served the town uninterruptedly for 900 years.

When in 1117 the first messenger arrived in town with the news of the sacrifice of earl Magnus on Egilsay, what, one may wonder, was the reaction of the townsfolk to the news. Were they shocked? Or had they known beforehand, as everyone else, the fateful and inevitable result of the earls’ meeting? Were they even relieved that it had turned out as it had? The answer we will never know, for the medieval ecclesiastical cover-up has been complete.

However the town became much affected when a few years later the relics of Saint Magnus were enshrined and placed over the altar in St Olaf’s Kirk. The gjaldkeri and his council of twelve were then faced with a unique and continuing problem, a problem shared by no other of the Norse market towns but Nidaros. The saga stories of the pilgrimages and the miracles one can accept or reject at will.

However, with the social and spiritual unrest of that time, and of which there is ample evidence throughout Europe, pilgrimages to Kirkwall there certainly would have been.

A different category of travellers, who were not rich merchants or seamen, and could not necessarily pay their way, would have come to town and the rules of hospitality dictated that they had to be housed and fed. How did the small town deal with such a social problem? Did some patron, or the Church, provide a spittle-house of some sort? Was it by mere chance that in the seventeenth century the then disused St Olaf’s Kirk became just such a hospice for the destitute? Or was that a continuation of an ancient tradition, and that there had always been a refuge for pilgrims and the poor beside the church?

A time of building

As if the governors of the small town had not already enough on their plate, after a few years came the eight-year-long construction of St Magnus Cathedral, and the so-called ‘Bishop’s Palace’, right there on their doorstep. It was again a problem imposed on the town, and it could hardly have been to the liking of the few hundred residents. They could not possibly visualise the imaginary cathedral as we can view it in actuality today. It would not be surprising if at the town Mót some practical-minded councillor advised that Earl Rognvald be asked to stick his ‘magnificent minster’ elsewhere.

However, rightly or wrongly, the ruling earl was patron and head of the town administration – a traditional situation which the town of Kirkwall was still fighting against in the seventeenth century. The town leaders had in consequence little or no control over matters that directly concerned the earl.

When Earl Rognvald planned his final campaign he knew of Kirkwall as already a suitably established town, the natural centre of population and communication in Orkney. He would have felt no need to consult with the town’s leaders when persuaded by his father to make his well-known vow to ‘have a church of stone built in Kirkwall in the Orkneys … so that there be not a more magnificent in the land.’

Easily said, and when said was certainly not envisaged the huge cathedral one sees today. However, it remains a lovely story even if it is as full of holes as a sieve. One should set against it Earl Rognvald’s own lampoon on the 16 monks of Westray which he spoke immediately after attending divine service, and which suggests that he had an ambiguous attitude to religion and the Church.

To my mind Earl Rognvald’s building of St Magnus Cathedral was a supreme act of spiritual revenge against the dead Earl Hakon, the sacrificer of Saint Magnus. On his return from the Holy Land, and as part of his penance for the killing of Saint Magnus, the Round Church at Orphir was built by Earl Hakon. Thought to be modelled on the Holy Sepulchre, it was unique in the North and in its day was indeed the ‘most magnificent in the land’. Earl Rognvald had to go one better: to belittle and disparage Earl Hakon’s atonement. It was yet a turn of the inter-tribal screw, the rivalry and lust for power which, through the earls, had made Orkney a battleground for centuries and was now being carried over into the spiritual field.

The main interest, however, is not how the building of the Cathedral was inspired, but rather to what extent the town was involved in the carrying out of the actual work. The town householders would have been responsible for accommodation and services of all kinds; while trade and shipping movements must have increased tremendously.

The number of craftsmen at work on the site need not have been great at any time. Such heavy masonry structures as the Cathedral were in the Middle Ages built in stages. When the walls had reached a stated height they were levelled, thatched, and so left over the winter to allow for settlement and consolidation. The work did not stop then – quarrying continued, transport of the stones continued, and the finer craft of stone-cutting and carving continued under shelter throughout the winter and spring.

First for the earl and then for the bishop

The simultaneous construction of the building known as the Bishop’s Palace was certainly not intended for the bishop when it was raised along with the Cathedral in 1137. Surely it would make little sense to build a palace for Bishop William while Earl Rognvald and his court were accommodated in what would be comparatively a hovel. There is no evidence in the neighbourhood of another building of the same age and of a like size and quality. To get around that awkward fact it has always been thought that the later Kirkwall Castle was built on the actual site of Earl Rognvald’s Norse hall, but by excavation that possibility has been eliminated. The bishop at that time was still a hird-bishop, and was to be found in residence at various places – Birsay, Damsay, Egilsay and elsewhere.

The Palace was in the twelfth century Earl Rognvald’s hall and court. A reasonable guess would be that it became the Bishop’s Palace on the death of Earl Rognvald, and was first occupied by Bishop Bjarni after his investiture in 1188. With the permission of the Pope, the canonisation of Saint Rognvald the Earl was carried out by Bishop Bjarni in 1192.

Another event of the century which must have made a great impact was the assembly in Kirkwall and the Isles of the Crusaders under the leadership of Earl Rognvald during 1150 and 1151, a waiting time of much entertainment, drinking, quarrelling and boredom. It would seem that during that waiting period several excursions were made to Maeshowe, which would account for the great many runic inscriptions still to be seen there. One can regard the breaking into Maeshowe as their first strike of the Crusade right there at home, for the Church at that time actively encouraged the plundering and despoliation of heather graves and all other evidence of paganism.

Saint Rognvald’s death in 1158 marked the end of the true-born Norse earls in Orkney; and while the Islands would remain Norwegian territory for another 200 years, eyes were already turned to Scotland. It was during that long period of gradual transition that the market town of Kirkwall played its most vital role as a trade link between Norway and the British Isles.

This article first appeared in The Orcadian of 20 August 1987, with the title ‘When Kirkwall was capital of a royal domain’.

As Orkney County Librarian after the war, Evan MacGillivray was responsible for many of the big developments that make Orkney’s library and museum services so highly valued by users. He laid the foundations for much research and scholarship, providing insights and resources for others and writing up various papers himself. His contribution to Orkney life was so outstanding that it could arguably be regarded as the greatest since the days of Earl Rognvald and Bishop Bjarni Kolbeinsson.