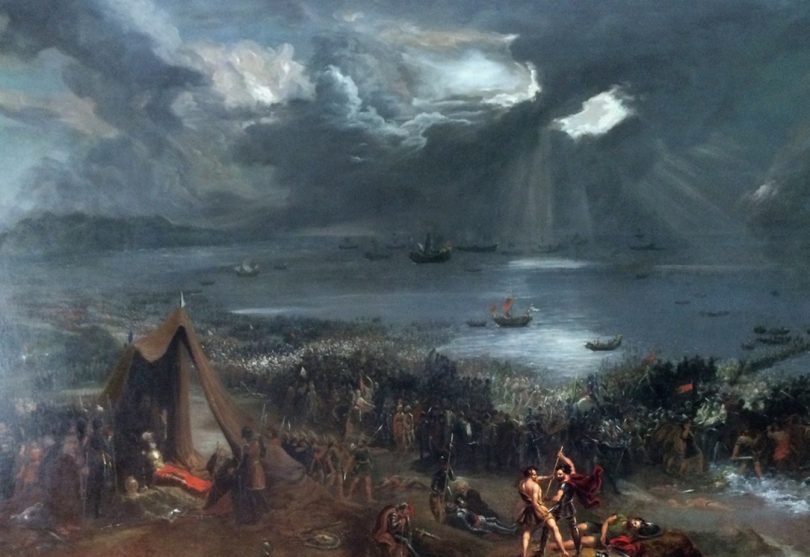 What made the battle stand out was not only the scale of the killing – and several thousand men died on each side, with the Irish annalist likening the killing to the work of reapers in the harvest field. But it also marked a key point in the history of Ireland and of the great sea route that stretched north and south from the Irish Sea.

It was on the sea route that the Norse king of Dublin, Sigtrygg Silkbeard, found support for his fight against the high king of Ireland, Brian Boru. King Sigtrygg sailed north to Orkney to bring in Earl Sigurd, and then to the Isle of Man to enlist Brodir, a viking with a fleet of ships lying off the coast. But a second viking with Brodir, called Ospak, refused to be drawn in with him, and went instead to warn King Brian and join his forces.

This was a time when ambitious men were becoming restless, as power was shifting in once-stable countries and thoughts were turning to the possibilities of gaining land or even winning kingdoms. A Danish army had invaded England, and in Ireland Brian Boru, who in youth had overcame Danish invaders and brought together the various kingdoms, was now in his 70s. Sigtrygg had support from his uncle, the king of Leinster – and Brian brought his army north to attack Dublin.

The city in those days was to the south of the Liffey, and Brian set up camp on the north shore of the river. On 22 April it seemed that Sigtrygg’s allies were deserting him, as ships set sail from Dublin harbour. But in the darkness they doubled back, to land on the beach at Clontarf on the north of the Liffey in the early hours of the morning. The Irish chronicler says that they were helped by the high tide, which allowed their ships to land at sunrise, and with Brian’s army facing them, the battle began.

The battle round the banner

Icelanders who were with Earl Sigurd’s force told the story of the battle, and how the earl himself was in the centre, with flying above him the raven banner woven for him by his mother Eithne, a princess of Ireland. She had told him that the banner aloft would bring victory, but at the price of death to the man who bore it.

Against him in the Irish centre was a man that the saga calls Kerthjalfad, a foster-son of Brian. Some have suggested that he was in fact Brian’s grandson Tairdelbach. At all events, he was in the words of the saga, ‘the bravest of men’ and he drove forward and felled the men at the forefront of the earl’s force.

‘Hrafn the Red,’ said the earl, ‘you take the standard.’

‘Carry your own devil yourself,’ said Hrafn.

The earl said, ‘A beggar should carry his own bundle’; he ripped the flag from its staff and tucked it under his clothing.

A little later Amundi the White was killed, and then the earl himself died with a spear through him.”

In chaos and ruin

By now the Irish had broken through on one flank, where Brodir was forced to retreat. On the other flank, where Ospak and two of Brian’s sons led the irish force, fighting was fierce, and both the sons were killed and Ospak severely wounded, but he continued to advance and the Norse line broke.

Now it was chaos, with the Norse force cut off from the Liffey and Dublin by the Irish and their one hope left was to get back to their ships. But the tide had carried some of the ships away. Trapped, they fought to the death and took many Irishmen with them. Some were more fortunate, among them Thorstein Hallsson who had already had a narrow escape from bearing the raven banner.

Thorstein Hallsson stopped running while the others were fleeing, and tied up his shoe-thong. Kerthjalfad asked him why he was not running.

‘Because,’ said Thorstein, ‘I cannot reach home tonight, for my home is out in Iceland.’

Hrafn the Red, who had also had a near-miss with the banner, managed to survive as well.

Hrafn the Red was chased into a river, and there he seemed to see down into the depths of Hell itself, with devils trying to drag him down. He said, ‘Your dog has run twice to Rome already, Saint Peter, and would do it a third time if you allowed it.’ Then the devils released him and he managed to reach the other bank of the river.”

Hrafn was in the Tolka, the river that runs to the north of the battleground, and flows like the Liffey into Dublin Bay. The tide that had been high at sunrise had risen again in the early evening, and the surge of the water in the Tolka would have made it hard going to cross it.

The time of the tide

The tide played a significant role in the battle, with first of all the high tide enabling the Norse army to land on the Clontarf shore, and the Irish chronicler is precise about it. The book is called the Cogadh Gáidhel re Gallaibh or ‘The war of the Irish with the Foreigners’, and it says that the tide was high early in the morning, close to sunrise when fighting began.

A 19th-century editor of the book decided to test this. He approached the professor of geology at the University of Dublin, the Rev. Samuel Haughton, with the question: “What was the hour of high water, at the shore of Clontarf, in Dublin Bay, on the 23rd of April, 1014?”

He knew the length of the cycle of the moon, so he could convert the number of days into the appropriate number of complete cycles of the moon – with a bit left over. The reason that he had chosen 12 December 1860 as his starting-point was because the new moon cycle started that day a little after 12 noon. So he could work backwards and find the nearest new moon to 23 April, and then the nearest full moon, which “occurred at 21 minutes past eleven on the night of the 16th April, 1014”.

That date for the full moon also confirmed that 23 April was indeed Good Friday.

He could then also work out the age of the moon at 12 noon on the day of the battle and that it would be a neap tide.

He then looked at the tide level at Kingstown for that age of the moon and from it worked out that the tide along the Clontarf shore would be high at 5.30 in the morning, with the evening tide full at 5.55 pm.

In the narrative,” he said in a paper read to the Royal Irish Academy in 1861, “the full tide in the morning is said to have coincided with the sunrise: and as the sun rises from 5.30 to 4.30 in the month of April, the truthfulness of the narrative becomes strikingly apparent.”

To write and remember

Dr Samuel Haughton went on to write further papers, on geology and on solar radiation and on the mechanics of animal movement, and in time became president of the Royal Irish Academy.

Brian Boru himself was killed in the later part of the battle. He was killed by Brodir who was captured and killed by the Irish. His death left a huge gap, but the Ireland that he had built was still strong enough to survive and the Norse were never again able to threaten to overcome it.

Hrafn the Red reached the Western Isles a week after the battle to bring the news of what had happened, while Thorstein Hallsson stayed on with the Irish who had spared his life.

And thanks to Hrafn’s escape from the rising tide in the Tolka we have the story of the battle in Njals saga to read today.