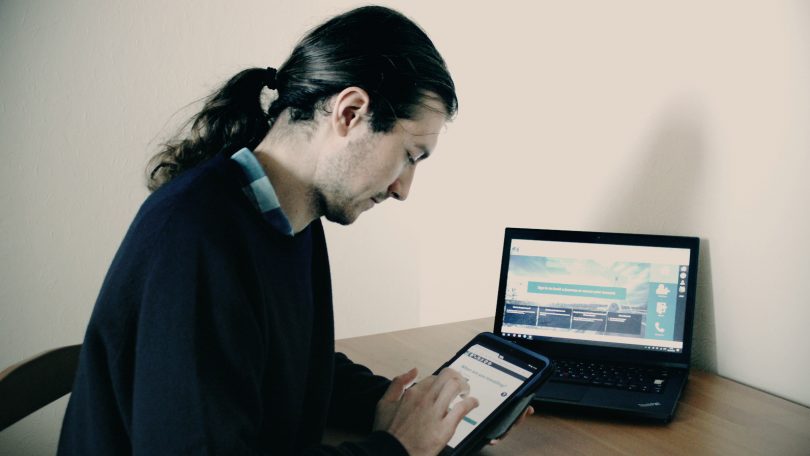 A new system to provide on-demand transport is to be tried out in this year’s Science Festival.

The system uses software to link passengers to the nearest car going to their chosen destination, and routes the car to collect them. It does so while taking account of the time constraints of both passenger and driver.

The system has been developed by the company Simply Connect whose founders Neil Brown and Galen Brown lived in Orkney for many years. Neil devised some of the core ideas by looking at how public transport currently works: what works well and what could be improved.

I wanted to find out what would be the ideal transport system,” he says. “It would have to be a system offering ease of use and flexibility for the user, while reducing fuel usage and providing community benefits.

There are many cars on the road with just the driver, so there’s scope for them to carry a passenger who wants to go to the same destination, But for that to happen, there needs to be a way for the passenger to know about the car’s existence and location, and also how to communicate with it.”

The software in our system takes in the passenger’s request and finds the nearest available driver in the system who can help them.”

Neil’s ideas were initially prompted by several years in Africa, where he experienced a wide range of transport that was informally organised and efficient.

The ideas were put into practice by Galen, who developed from scratch the technology that underpins the system, which is known as Simply Connect.

Galen, who has an MSc in computer science from the University of St Andrews, is a former pupil of Stromness Academy, where he won an award at the 2007 EU Contest for Young Scientists with his development of an energy-saving device aimed at minimising energy wasted by televisions left on standby.

The system has received development funding from both Innovate UK and the Department for Transport. It was tried out in Exeter last year after the company won the first-ever place on an accelerator programme with Exeter City Futures.

The trial was on a very small scale,” Neil says. “We did it with just one vehicle carrying people to and from work. Despite the small size, we had very good feedback from the passengers and we learnt a lot. We now want to test the system with a bigger number of vehicles.”

The Orkney trial will take place over the period of this year’s Orkney International Science Festival, from Thursday 6 to Wednesday 12 September. It will involve drivers following instructions sent to their smartphones (or tablets). The instructions direct drivers to pick up one or more users to go to or from Festival events.

The Festival is an ideal time to try out the system,” says Galen, “as people want to travel to events, visitors as well as local people, and drivers often have space to take a passenger if there was a way to let them know about them.

We are looking for car drivers who would like to take part. You will need to have an Android phone or tablet (with a data allowance) and to be available for at least three hours over the period of the festival.

We’re particularly keen to find people who could be available for at least three hours on Saturday 8 September. This is because we want to test our software with a larger number of vehicles on that day. But if there are other days that you can manage instead, do let us know at orkney@simply-connect.com and we’ll get back to you with more information.

We are also looking for other volunteers to help us make a success of the trials, so even if you don’t have a car but would still like to help, please do get in touch as well.

There will be no payment for the trials, either by passengers or to drivers. For most drivers, your normal car insurance will be sufficient. If in any doubt, you should check with your insurance company.”

Galen says that Simply Connect’s longer-term approach is for a locally-owned community company to operate the mobility platform.

We will use the trials, and feedback received, to explore the value of this approach in rural areas.”