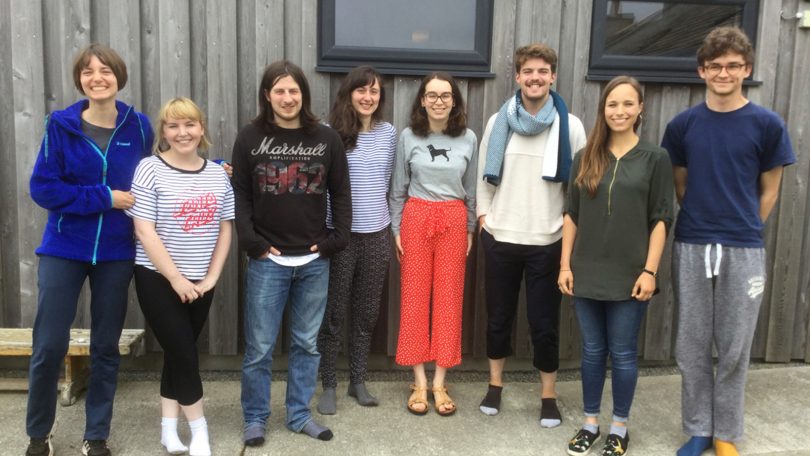 Photo of group at Voice Centre

The skills that helped train the voices of both Hollywood actors and the Global Leadership Fellows of the World Economic Forum have been helping eight young people to prepare to host this year’s Orkney International Science Festival.


Kristin Linklater is world-renowned for her teaching of voice production in a career of over fifty years in the theatre and academia in US and Europe. She was Professor of Theatre Arts at Columbia University and worked with several American theatre companies, while also coaching name actors such as Patrick Stewart, Donald Sutherland, Mary Tyler Moore, Sigourney Weaver and Kim Cattrall.

Five years ago she moved back to her native Orkney, where in 2014 the Kristin Linklater Voice Centre opened its doors as a residential voice training centre offering a variety of voice and text courses throughout the year.

She has now been providing a special course of training to a group of young people who will between them share the hosting of all the events in this year’s Science Festival from 6-12 September.

The context is the Year of Young People 2018 in Scotland, which the Science Festival, now in its 28th year, has taken as a big opportunity to bring young people to the fore. With support from the Year of Young People Event Fund managed by EventScotland it has put together a package of activities which will help it do so, in particular bringing together a group of young people to introduce all the events in this year’s programme this year and giving the new team some of the best voice training in the world.

It was Year of Young People funding that laid the foundation,” says Science Festival director Howie Firth, “and then we got a wonderfully generous response from Kristin who built us in to her social contribution to the Orkney community. As a result, the group are getting the kind of training that up till now we could only have dreamed of.

They are a very talented group, with a range of backgrounds, some in science, some in writing, some in design, and some in music. Most live in Orkney but we’ve also been able to get some from elsewhere with a deep interest in what we do, with whom we hope to build a long-term connection.”

In the Festival in September, members of the group will host a wide range of events, including talks and dramatised lectures by speakers from Canada to Australia, and from Iceland to Uzbekistan.

Participants on the course

Bethany Ansell, a graduate of English and modern history from St Andrews, currently works for Perth and Kinross Council on a project to transform an old City Hall into a museum. Originally from the East Midlands, she is settled in Scotland and will be getting married in St Andrews in August. She enjoys reading, cooking, running and playing the piano.

Tom Ashman is a musician and songwriter, born in Kirkwall and based in Orkney. He studies Applied Music at UHI and currently works as a guitar tutor at The Reel in Kirkwall amongst various other jobs.

Dion Dobrzynski grew up in an old colliery town in Nottinghamshire and later moved to Orkney. He is a poet and postgraduate student on the MLitt Environment, Culture and Communication course at the University of Glasgow. He is interested in poetic responses to place and environmental philosophy and enjoys beachcoming, photography and writing poetry.

Gina Ramsay is a graphic designer and illustrator based in Orkney. She moved to the UK in 2005, later studying at Duncan of Jordanstone College in Dundee. She loves to produce intricate and playful work, often based around Orkney, Scotland and the sea. She has a line of items derived from her illustrations which she sells online and in local shops, and has a deep interest in the arts and seeing creativity used across all media.

Hayley Russell is an environmental chemistry student at the University of Edinburgh. Originally from West Lothian, she has just completed a year-long work placement in the US before returning to Scotland this summer. In her free time, she enjoys reading, writing a lifestyle blog, and rock climbing.

Martin Turner is a 3rd year fashion design student at Heriot-Watt University’s school of textiles and design. He plays underwater hockey for both Scotland and Great Britain, and the sport has taken him to Australia, Spain and many other countries. He lives in Orkney and is originally from a small village on the west coast of Scotland.

Heather Woodbridge is a recent graduate of the University of Stirling with a degree in ecology, and is about to start work for SNH in Kirkwall as part of the Orkney Native Wildlife Project. Growing up in the island of North Ronaldsay, she was immersed in the rich community and distinctive agriculture of the island. She is interested in population biology, and particularly in the management of the rare-breed North Ronaldsay (seaweed-eating) sheep. She is a director of the North Ronaldsay Trust and of the Orkney Sheep Foundation, and is this year’s coordinator of the North Ronaldsay Sheep Festival. She plays and teaches the fiddle and mandolin.