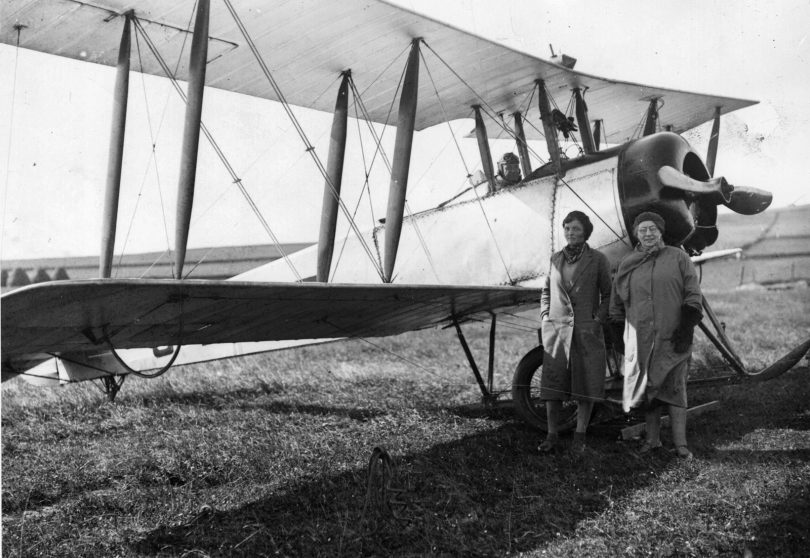 This is a tale of castles in the air realised. For many years I have been a thrilled but despairing ‘aeroplane-starer’; at each and every appearance of a ‘plane in Orkney – roar of engine overhead, glint of sun on silver wings and scarlet paint – I have crinked my neck and tried vainly to imagine – to imagine; only to get a vague and fleeting excitement from the proximity of the ‘plane. For many moons I have nurtured the faintly incredulous hope of a flight ‘sometime’. The suddenly – miraculously or providentially – the hope was realised a hundredfold; a vague and extravagant castle in the air came true.

At 11 a.m. on Saturday, Flying Officer E.E. Fresson and his engineer, Mr. J. Warr, landed at Kirkwall from Wick in their 110 h.p  Avro biplane. At 3 p.m. they carried off with them – possibly because of her wistful eye, possibly for ballast – an extra passenger – me!

And the expectation of thrills and excitement? It was not disappointed. Flying is unique among sensations because it combines all the most wonderful experiences of your life with half-a-dozen new ones thrown in; it makes you think more clearly and, paradoxically, more extravagantly. Imagine yourself on top of the Ward Hill on the finest summer day, imagine yourself swimming through every blue and icy water, sailing on a calm night, racing in a motor car, swinging amid the lights and din of the market, bathing with a high wind – and you have something of my first flying sensations.

There was the embarrassment of climbing into the machine – the starer stared at; a rush of wind from the propeller; the bewilderment of the taxi across the field when the engine roared and the wind whistled and my beret flew away and my heart thumped and my goggles slipped down; then swiftly and smoothly we were up in the air, up in the wind and sun and clouds, above a solidly blue sun, and flying was the most natural thing in the world.

A sweep over the bay, and we had circled once, twice, over the harbour and the swimming gala. To think I should have been one of the swimmers – yellow flies outspread on a greasy green flypaper – or one of these upturned dots of faces! Instead of which I was flying! I wanted to shout, (to misquote A.A. Milne’s Pooh, when he first found himself swimming), “Look at me! I’m flying! Can’t you see me flying? Look! Look!”

Kirkwall from the air seems much more insignificant than when approached by sea or by land. The Cathedral loses its dignity and is uniform with the other buildings of the town; the Bishop’s Palace is a rotund little pepper-pot; the streets are slits. Only the pier, elongated, graceful and flanked by ships, and the sweep of the Crescent, look well.

Flying south above the familiar Scapa Road and Bay, we were out over the Flow, so swiftly that I can scarcely remember it. And now, how to describe to you the wonder of that view, high above the Pentland? The wind like an intangible sheet of steel, a deafening but exciting roar and rush of engines, one’s hair slashing one like a whirlwind of knives, then to look round at the wide, still panorama of sea and sky and land.

Almost all Orkney could be seen and a large part of Scotland. Hoy, with its mighty hills, dwarfed and clustered about with lesser islands, lay to the right, and very faintly in the misty meeting of cloud and sun and water could be seen the salved German ships. On the left lay Holm and Burray – insipidly green and smiling; between them the sunken blockships; and below us Hunda, like a mud-pie.

Then we were over the grey cluster of St Margaret’s Hope, on the edge of its horse-shoe bay; another long, slender pier; another sunken ship poking up out of Water Sound.

After a second – or at least it seemed a second – of looking at mud-pie islands, the occasional white dot of a lighthouse, the labouring of a minute vessel in the wide stretch of sea, the sunlit wings of the aeroplane and its tail tapering into space behind me – we were in Scotland!

Scotland from the air?

Cutting across the neck of land which culminates in Dunnet Head, in a few minutes we were once more flying over sea. Sinclair’s Bay was really wine-dark sea – a purply grape-blue, abruptly fringed with a curve of white sand. We passed over wooded Bucholly Castle; then a thin, old tower that stood out to sea on a rock. Another stretch of land and we had reached Wick.

After performing a sort of corkscrew manoeuvres over the centre of the town which gave one the rather nightmarish (but rare) feeling of being caught in the spokes of an electric fan, we landed in the flying field so gently that it took me quite a while to realise it. The flight was over.

Agnes M. Shearer, born in 1914, went on from The Orcadian to work for a time in Fleet Street and then to Edinburgh where she married the writer George Scott-Moncrieff. As Ann Scott-Moncrieff she wrote stories, poems and three books for children. She died in 1943, at the age of only 29, leaving work that is full of depth and understanding and adventure. ‘She was,’ wrote the poet Edwin Muir, ‘one of the rarest human beings that Scotland has produced in our time.’