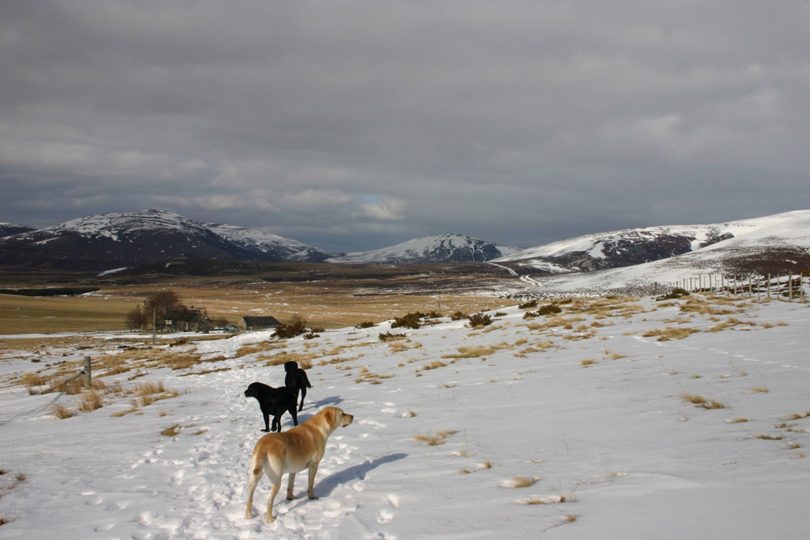 Writer, broadcaster and food anthropologist Ghillie Basan is coming to the Orkney International Science Festival, excited at the prospect of getting an insight into the role of food tourism in the islands, as well as a glimpse into the lives of those who, like herself, have chosen to provide these carefully crafted, unique experiences of local food and culture.

Ghillie will be recording a series of food and drink podcasts while she is in Orkney for broadcast over autumn and winter, and hopes that people will be happy to share not only their food stories, but also how their personal journey’s have shaped where they are today, just as she has in this article.

She will also be talking about her new book “Spirit and Spice”, which has earned her the title of “the original spice girl” and ties in neatly with the festival’s foraging events, pairing wild produce and flavours from Scotland and other parts of the world with whisky.

Living off the beaten track in the wilds of the Scottish Highlands demands resilience, and fortunately that is not something Ghillie Basan lacks. She has overcome the difficulties of raising her two children single-handedly, at a property which, during winter, was only accessible by cross-country ski, while at the same time carving out a career for herself as an international food writer.

She wrote 40 books while her children were young. This did not mean sitting at home on the computer – the house had no water or electricity when they first moved in – so she took the children with her on travels to Europe, the Middle East, Africa and Southeast Asia.

It was a lifestyle which fortunately inspired a similar spirit of adventure in her them, kept the proverbial wolf from the door, and allowed her the opportunity to turn the rundown property first of all into a family home and then into a food tourism business.

It was a struggle and a joy. I kept life simple while I raised the kids. I looked after them during the day and wrote books at night.  It paid the bills and kept the snow from landing on end of my bed, which used to happen.”

It was a question of taking things day by day and gradually developing new projects as the children got older and more independent.  She started running cookery workshops from home, and renovated the cottage to provide extra income through accommodation, she branched out into radio, and most recently, has added whisky to the mix.

While it might seem as if one thing led naturally to another, it wasn’t quite as straightforward as that. During this time, her mother developed dementia, meaning Ghillie had to change the course of her business, eventually taking two years out of her work completely, to look after her mother.

It was very difficult because I had to become mother’s carer, but you drop everything for family. I had been dropping things slowly before that to help her, but eventually had to be there pretty much around the clock.

I was also aware of the fact I wasn’t making any money and knew I would hit rock bottom. I was self employed and there was no money coming in. Eventually she had to go into a home and I had to make it permanent and face the guilt of having to do that. It was really tough and you don’t just recover overnight.”

When she did get back to work, she discovered that in the space of those two years the shape of the publishing industry had changed dramatically, and an approach to her usual London publishers about the production of a new book on spices received a decidedly lukewarm reception.

They inquired about her social media following – the new marketing strategy – and when Ghillie informed them she didn’t use social media they suggested she might like to “help” some celebrities write their books instead.

As it happened there was one who wanted to write a book about Morocco and wanted Ghillie to help him using her own books as reference.

I thought oh my goodness, is this what the world has come to? I’ll never be able to write a book again if it’s all about social media, so I scrapped that idea, didn’t help the celebrity (although he used my books anyway) and I sat at my desk, looked at my view and thought what am I going to do to save my house and my lifestyle?”

It turns out the answer was right in front of her. She suddenly realised she was sitting in a whisky smuggler’s glen, but had never done anything about whisky. Slowly an idea for a new business began to emerge. She might not have money, but she had her knowledge, her ability to cook and crucially, her Landrover.

And so a new venture began. Chivas was first on board. Wilderness Scotland and Rothiemurchus Estate were also eager to be part of it. She has put the large barn on her property to use as a “Whisky Barn” and because she is in a smuggler’s glen anyway, Chivas are delighted to bring clients to her for an authentic on-site experience.

Guests enjoy the location as well as the food Ghillie prepares to compliment the whisky. Sometimes corporate groups, accompanied by an ambassador from the whisky company, will arrive for a foraging and cooking experience which includes the wild food they have collected.

While it is centred around Scottish food and flavours, Ghillie also includes a dish, appropriate to the varied cultural experience of her guests, which also pairs well with the whisky being sampled.

Although I am slowly building up this whisky and food experience side, and have managed to write a book in that time, and get my podcast off the ground, it has been a slow build and I’m still not totally there.”

The experience of looking after her mother has also demonstrated how important it is to be able to talk to other people about life experiences, and she has incorporated this into her podcasts, which also delve into the stories behind the food and drink.

Travel inspires her and she is looking forward to her first visit to Orkney.

I’m loving the whole food and drink tourism side of Scotland at the moment and I’m hoping to see a lot of that in Orkney. People are so passionate about what they do, and are producing amazing things, even as simple as salt, or more complicated like curing meats and creating salamis. There is so much going on and that’s inspiring too. You can get swept along by other people’s passion.”

Ghillie hopes that anyone in Orkney involved in the food tourism business will feel free to get in touch with her and through her podcasts she can give them a voice on the mainland.