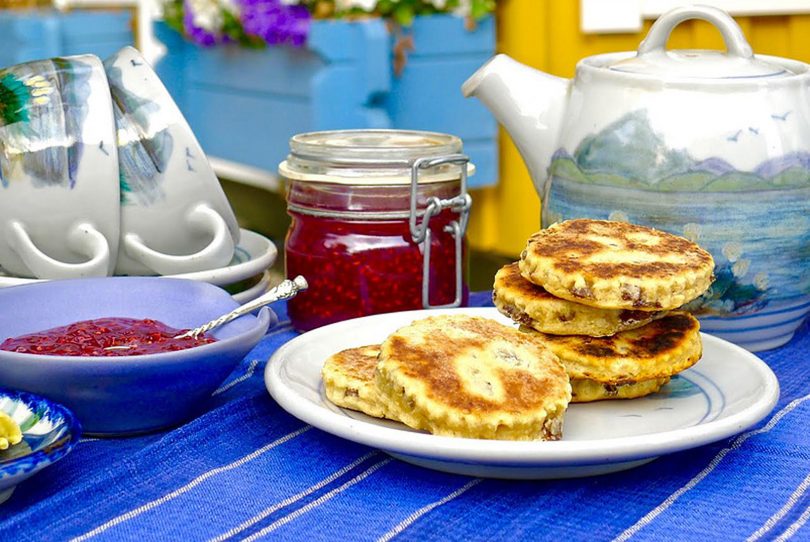 Wendy Barrie is coordinating Foraging Fortnight events on mainland Scotland, and coming to Orkney to speak on Swedish food from the wild. Mary Leonard has been finding out more about her background.

Affectionately known as Scotland’s Foodie, Wendy Barrie is, as you might imagine, passionate about food – particularly the locally produced and home-grown variety. In the same sentence as she talks about food, she also mentions fairness, transparency and education – her other passions, which are evident throughout her work.

From compiling the Scottish Food Guide and Scottish Cheese Trail, to attending food festivals and cookery shows, as well as co-ordinating the Scottish chapter of the Slow Food Movement’s Ark of Taste, Wendy is keenly aware of developments in the food industry, what is successful and what needs improvement. She is particularly enthusiastic about the move to re-embed foraging as part of the seasonal calendar. It is a move which unites all her passions in one activity.

Restoring lost traditions, learning new skills and reconnecting with nature and the seasons, goes hand in hand with the Scottish Obesity Plan, the Good Food Nation and tourism plans. It also gets people outside in the fresh air, doing physical exercise, improving wellbeing and mental health.

While here in Scotland we have lost some of that traditional knowledge, in many other countries foraging is part of the culture, and in spring and autumn hillsides and meadows are full of people out collecting their own food. Wendy says she has learned a lot from her Swedish husband, to whom it is second nature. They have spruce tips in syrup in their fridge at home in Aberdour, and they also collect the more well-known plants such as brambles, rosehips, nettles, dandelions and wild marjoram.

We do it on a fairly basic level at home, regularly, and now I’m inspired to do more. But something I’m very aware of in this Foraging Fortnight is that if you are speaking to people who have never done it before, you have to make them aware that you really do need to know what you’re doing. Stick to the dead certs or go on a guided walk.”

Some foraging walks in the Fortnight programme will include workshops and cookery shows, which plants to select and how to prepare and cook them, as well as a little bit of bushcraft. Others will take a more mindful approach, concentrating on the benefits of simply being out in nature and identifying plants along the way.

For Wendy the reintroduction of foraging into the food calendar is another step in the right direction in learning to value and appreciate Scottish food. Restaurants and cafes are encouraged to be a part of it, using the opportunity to put something seasonal, local, foraged or wild on their menus. A significant number of chefs featured in the Scottish Food Guide are already doing this and are seeing the benefits.

While foraging can be time-consuming, unless you build it into your schedule or have someone to do it for you, it can also be extremely economical.

We want to open minds and hearts so that more people do it. Why buy a case of garlic bulbs from France if you have an entire ravine of it on your doorstep? Those that do it see and enjoy the benefits and often have a good walk themselves, so it would be good to see more of it, but we have to have the knowledge.”

This leads into another of Wendy’s passions, food education – not just cooking classes, but also an awareness and an appreciation of the treasures we have here in Scotland.

She is spurred on also by a sense of justice for small local producers, perhaps no surprise, as her original intention when leaving school was to study law, but she very quickly decided it wasn’t for her and went to catering college instead.

Much as she loves food, it was never her dream to run a restaurant. Her interest instead lay in working with local products and the people behind the food – the local farmers and producers.

For a number of years she was Chief Inspector for the National Food Guide, but felt things should be done differently, so in 2001 she left and started the Scottish Food Guide, which along with the Scottish Cheese Trail, is her own independent work.

Her work takes her all over the country visiting producers, attending food festivals and cookery shows, and while she is happy with the general direction in which food in Scotland is heading, she believes there is still a lot more that needs to be achieved.

There is a bulge of mediocrity that people are turning a blind eye to. It is not all excellent. It could be more excellent.”

More importance needs to be placed on food education, from early years in schools, so that people grow up with a general knowledge about our native breeds, sustainably caught seafood and wild produce that we have forgotten about.

Instead of haddock and chips we should be less shy about our own crustaceans and seafood. Even the better restaurants are terrified of taking the tuna wrap off the menu, or the tuna panini, because somebody wants it somewhere. They just don’t have the faith to go with what is outside their window.”

Foraging provides an excellent grounding in local knowledge and fits well with those Wendy champions, from food tourism providers in out of the way places, to small producers overburdened by regulations.

Small food producers have a hard time. Their products can be a premium price, but they are exceptionally good. They get a lot of bureaucracy hanging around them, disproportionate, arguably, to the product, whereas the mass producing big boys can have a lot more behind them to deal with these things.”

Foraging means a return to a more simple, hands-on connection with food, from where it is growing, to how it is prepared and consumed.

I hope we can inspire people to get out of their houses and join in. September is a beautiful time of the year.”

A website www.foragingfortnight.co.uk will be up and running very soon and will provide full details about how to become involved as well as a tool kit for anyone wanting to run an event during the two weeks. It will also feature useful plant information from Scottish National Heritage

Further information can be obtained from Wendy by contacting her via her website: