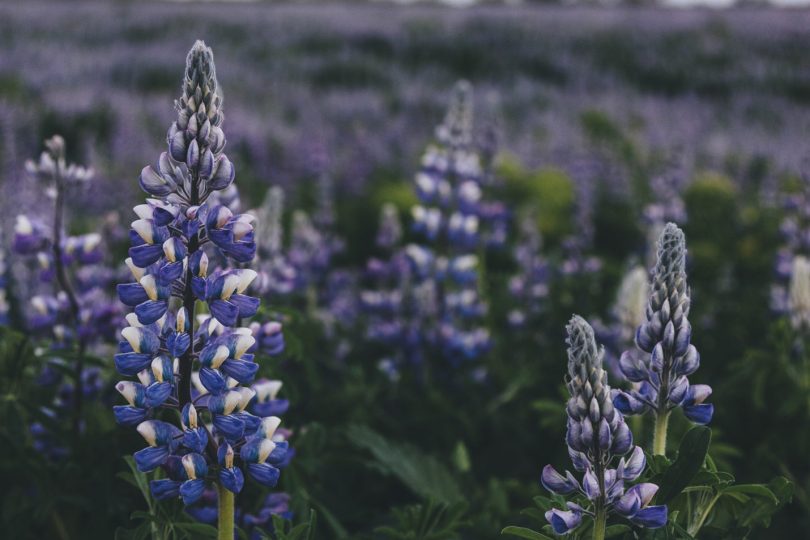 Broad-leaved trees can grow almost anywhere sheep and deer are largely excluded. You can see natural regrowth on sheep-free hills, had to reach verges and central motorway reservations where deer fear to tread. But excluding tiny teeth is not enough. After a century of overgrazing, soil needs a revival. When that’s done, a lush flower, herb and insect-rich woodland habitat can be recreated very easily – given vision, patience, wire fencing … and some lupins. The proof lies in six areas of woodland off the A9, on the barren wasteland of Dalnaspidal by Loch Garry.

Twenty-five years ago, local ecologists Ron Greer and Derek Pretswell used a ‘succession planting’ technique – mixing lupins and broom with broad-leaved saplings. There was method in their madness. Lupins and Scotch Broom fixed nitrogen in the soil, provided shelter in high winds for growing plants and raised micro-temperatures at soil level so the trees could finally flourish. Sheep and deer were fenced out, but two years into the experiment it looked like the lupins and broom had taken over. Today though, those first protective species have mostly gone, replaced by wild raspberries, insects, herbs and flowers blossoming under tree species which provide daylight beneath open canopies and leaf litter for bigger, healthier fish in the neighbouring loch. Exotic grey, red and green Alders have added more nitrogen to the soil. Larch allow blueberries and heather to grow beneath them and also make excellent wood for fuel. Ditto Norwegian Maple, which provides a source of glorious colour in the autumn. They are all non-native trees and yet utterly effective in transforming this part of the man and sheep-made desert that flanks the highest parts of the A9. – Lesley Riddoch, Blossom (Luath Press, 2013)

The photo is a shot of a Loch Garry Tree Group (founded by Ron Greer and I) enclosure in front of a hillside that was mapped in 1750 as forest by General Roy and forty years later saw the introduction of the extensive sheep regime. Subject to muir burn as part of grouse moor management, you can see the cumulative effect of management practices on a hillside that once had forest capable of hiding a Jacobite army.

We are in a time of great environmental peril. Our own existence and that of all life on earth is threatened, and this requires us to bring about a meaningful and lasting change in our relationship with the environment.

Failure to address the fundamental issues that are causing the imbalance on the planet will result in nothing more than a delay of the inevitable. Scotland, by its very size, cannot change the world; but it can change the way in which the world changes itself.

The Anthropocene was named in recognition of the dominance of humankind on the planet, and more pertinently, the destruction wreaked upon the planet’s natural ecosystems as a result of this dominance. The word dominance in itself recognises the imbalance in our relationship with the environment; a change which has moved us from living in the environment to living upon it.

We have developed systems which recognise this, but to a greater or lesser extent they dare not speak its name. We build systems and organisations that are understandably protectionist, trying to halt our deprivations on the natural world; and they too have become part of the problem as they make us feel as though we are sorting out our mess. However, as long as our social and economic systems detach themselves from their environmental consequences, then, environmentally, we are merely building theme parks.

Evolution and succession are biological processes that are generally ignored as we drive towards biodiversity checklists: the final manifestation of our stasis conservation. We give designations to landscapes and ecosystems that are snapshots in time, captured in static legislation that preserves. Our legislative footprints are etched across these ‘natural’ landscapes, in silent testimony to our dominance, unseen but not unwritten. It is certainly not because we recognise and adhere to the right of the natural world to live free of our footprints in a safe homeland of its own; a non-anthropogenic world large enough to meet their needs and not ours, as this would require a change in thinking beyond Richter.

So when Scotland’s politicians want to develop a green environmental policy, then they should first change our relationship with the environment, and recognise this will not be fulfilled in a single parliamentary term but will require generational time to accomplish. Its first step should be to change the underlying philosophy of our relationship with the environment, and not to start with new legislation which merely shuffles the deckchairs on the Titanic. In the tripartite relationship of economic, environmental and social factors outlined by the Brundtland Commission report, or work, folk and place of Patrick Geddes, primacy should be given to the Environment. At its simplest, if we destroy that then the other two fall; at its more philosophical, if we want to protect it, we should stop trying to control it, and instead control ourselves.

Scotland has an amazing opportunity to demonstrate to the world what the world’s direction of travel should be. We have a population size which is capable of developing a high quality of life in balance with our environment and its natural resources.  Currently we have urban, rural and wild landscapes, all of them covered in anthropogenic footprints.  All of them making money for someone, either directly or indirectly, or giving power directly or indirectly to some individual or corporate body.

A change in philosophy, creating Wildland, Cultural and Urban landscapes, would see the removal of the anthropogenic footprints from wildland, and the incursion of biotic footprints along a gradient through the cultural landscape and into the urban.

Wildland would be the homeland for our natural systems; a place where they are safe and can flourish in accordance with biological processes. It should be on a national scale encompassing the length and breadth of our country, and be contiguous in nature, allowing for movement of wildlife; terminal predators should be included in its totality. The long temporal nature of this development should be recognised to prevent alarm at the thought of predators.

The cultural landscape would be the most important of our designations as it is the buffer between the wildland and anthropogenic cultures. It is the area where the process of balanced rewilding would enhance the productivity, aesthetic and recreational uses of the land as a means of supporting the quality of life of the communities who live there. Here the land is permeated with the footprints of the natural world but its purpose is as a sustainable platform for our communities.

The Urban landscape, the most anthropogenic landscape, should also be permeated with the natural world. Trees can reduce city temperatures, the impact of noise and air pollution as it is now, they have a pivotal role in water management and provide aesthetic and recreational values to the residents’ quality of life. Did I mention the educational value?

All these things are possible if we realise that there is a population size beyond which our resource degrades and our quality of life diminishes. With the current war in Ukraine, resource security has become a strategic national concern. Scotland has a population size capable of being supported from the potential of our natural resource base. Population size will always be the elephant in the planet-size room until we recognise it and work out how to solve it. Ignoring it will not make it go away and that may be too late for much of the planet’s wildlife.

Scotland is in a position to demonstrate the Brundtland principles. It requires just two philosophical changes. The first is the right of our natural world to exist on the planet free from human exploitation. The second is the right of every man, woman and child to a quality life; the right to water, food, clean air, housing and protection; the ability to control their own lives and have predictability of resources above the level of survivor. The disparity in wealth should be addressed to fulfil these requirements and the resources of a nation that believes in the sovereignty of the people should be just that, the nation’s resources.  Land should be owned by the state eventually but access to that land should be to the benefit of all the people to build a quality of life in and not as an economic chip in life’s poker game.

There is no linearity to this, we are trying to change a spider’s web. It will require economic and social change and those pathways to change have to be clear and people have to be supported in this change. We too often focus on the details of the change and not enough on the process and consequences of change. It should be simple if we have a clear and strong underlying philosophy, but it will not be easy and recognition of that should enhance our commitment to it and not deflect us from it.

As soon as one creates an organisation, the first thing that organisation develops is a survival instinct. It is unwritten, but all decisions are tempered in the forge of self-preservation. Ideas that are fed into such organisations are often cherry picked to meet the organisation’s agenda and not the context of the original idea. What is often the case is that cherry picking results in the deconstruction of the Cherry tree.

The right of the natural world to exist in an unfettered state requires us to control ourselves. So we need to manage our cultural landscape, outside of our wildland, on sound ecological principles, and manage our population size and density so we can build a lasting, better quality of life for all. This can be enshrined in a written constitution that serves the fundamental needs of the people and the natural world and not those of the politicians nor the institutions that serve them. Balance with quality of life for all is achievable for Scotland if we build on the right underlying philosophy which is manifest in a written constitution; a charter for Scotland and the rest of the world.

Buckminster Fuller suggests that we never change things by fighting the existing reality. To change something, build a new model that makes the existing model obsolete.

Derek Pretswell is a zoology graduate of Aberdeen and started working on
reforestation and landuse with Ron Greer in 1983 while both of them were fishery biologists with the Department of Agriculture for Scotland. He is vice-chair of the Resource Use Institute.