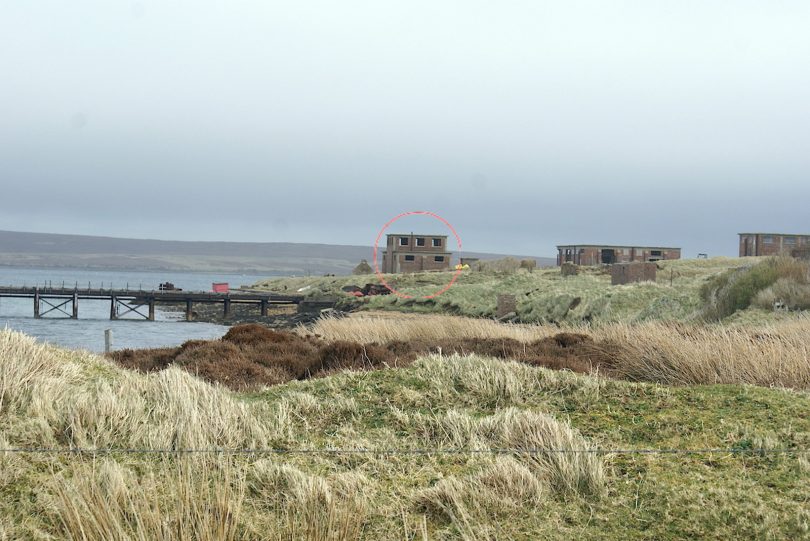 Written by Michael McLaughlin
[dropcap]I[/dropcap]n 1939 a decision was taken by the War Office to form a balloon barrage in Orkney for the defence of the Naval base at Lyness and the Home Fleet Anchorage in Scapa Flow.

Initially supplies of the hydrogen gas needed to inflate the balloons were shipped in cylinders from pier heads in Leith and Aberdeen. However, the Orkney weather, particularly in winter, with frequent gales causing both shipping difficulties and significant loss of balloons, gave rise to great anxiety regarding the reliability of the supply of sufficient hydrogen gas. In the summer of 1940, on the day when the target to fly 40 balloons was first reached, a gale blew up and 39 were lost!

In order that a reserve supply should always be available in Orkney, a decision was taken to set up a hydrogen producing factory at Rinnigill, near Lyness, complete with a deep water pier.

Initially, a portable ‘Jaubert’ plant would be installed to the north of Lyness, as a temporary means of providing a reserve supply of hydrogen gas.

Interestingly, the hydrogen factory at Rinnigill took so long to construct that it was late in the war before it was in production, by which time the threat from enemy planes was no longer a major concern for Orkney. Also, the ‘Jaubert’ plant proved to have limited success, producing ‘small quantities of gas, large quantities of steam, and unending amusement for sailors ashore’.

How was the hydrogen produced?

At the time of World War II, large-scale commercial supplies of hydrogen gas were produced from fossil fuels or by electrolysis of water. However, neither method would have been very appropriate for a location such as the Orkney island of Hoy. So, what was the method used?

In the early part of the 20th century, much research was taking place on methods of producing hydrogen, including for the use in military balloons. Very much at the forefront of this work was a prolific Swiss born research scientist called George François Jaubert, who had researched and promoted the preparation of hydrogen by the action of sodium hydroxide on ferrosilicon as early as 1908.

Jaubert also patented the design of many devices or plants to carry out this process on a large scale, particularly for a portable hydrogen generator suitable for filling balloons for military use on ships and in the ‘field’. These plants could generate between 1500 and 6000 cubic feet of gas per hour.

This process for generating hydrogen gas is called the ferrosilicon method (also known as the silicol process).

The reactants for the process are:
* sodium hydroxide (caustic soda)
* ferrosilicon
* and water.

The process has many advantages, particularly for military use.
* it requires only a small amount of electricity or motor to operate a stirring mechanism
* the materials are very stable, easy to handle and store
* and they do not generate hydrogen until mixed.

In addition large quantities of gas can be generated quickly in a portable unit small enough to fit on a truck for field service.

How they made it

A pressure vessel was filled with solid sodium hydroxide and ferrosilicon, before adding water and stirring the mixture.

The exothermic dissolving of the sodium hydroxide in the water heated the mixture quickly to about 95ºC (200°F) and started the reaction.

The principal drawbacks of the process are that it is a batch process, as opposed to the much more efficient continuous process, and that the waste products can require a laborious operation of quickly scraping them from the reaction chamber before they cool and solidify.

It is also important for the safe operation of the plant that cold water is added to control the temperature of the reaction chamber and so reduce the production of excess steam.

It should also be noted that the alloy ferrosilicon, composed of the elements iron and silicon only, is chemically a very different substance from the compound ferrosilicate, composed of the elements iron, silicon, and oxygen. The latter would not react with sodium hydroxide solution to produce hydrogen gas, but it has been incorrectly quoted as the second reactant in a number of publications. The error is likely to have inadvertently arisen due to a misunderstanding of the correct chemical name for the reactant by a wartime witness.

While hydrogen can be prepared by the action of sodium hydroxide on the element silicon alone, the use of the cheaper ferrosilicon, an alloy of iron and silicon with an average silicon content between 15 and 90 percentage by weight (which is produced by the reduction of silica, or sand, with coke in the presence of scrap iron, or other source of iron) was preferred.

The principal reaction involved may be represented by the equation:

However, the reaction is not a simple one-step process, but is rather a complex series of reactions which can be combined to give the overall equation, showing the formation of hydrogen and silicic acid:

The ultimate reaction may, therefore, be regarded as one between silicon and water in which the alkali sodium hydroxide acts as a catalyst.

The Generation of Hydrogen by the Reaction between Ferrosilicon and a Solution of Sodium Hydroxide. E R Weaver. The Journal of Industrial and Engineering Chemistry, 12,1920, 232-40

A chemistry graduate from Edinburgh University, Michael spent most of his working life in secondary education in East Lothian, before moving to Orkney in 2007 and returning to the classroom as Principal Teacher of Chemistry at Stromness Academy. Now retired, he devotes much of his spare time to the local drama scene and the Orkney Historic Boat Society.