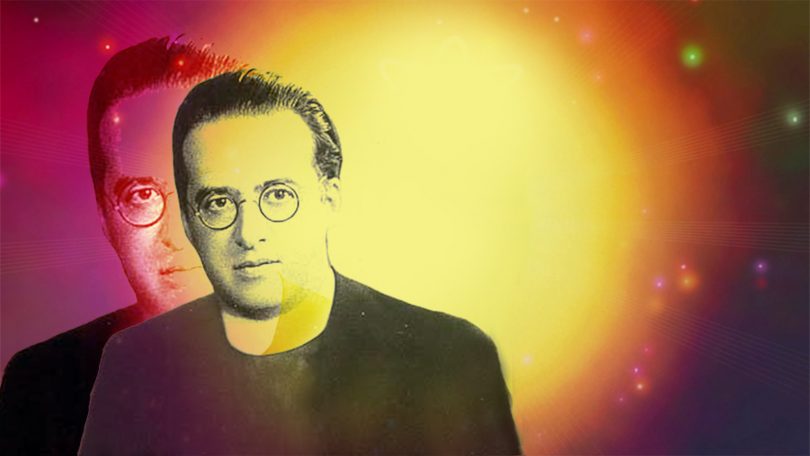 Imagine that you are standing on the moon, holding a steel ball between finger and thumb. If you were to simply let go of the ball, it would fall to the moon’s surface – slowly, because the moon’s gravity is weaker than what we are used to on earth. But it would fall.

If, instead of merely releasing it, you tossed the ball gently upwards, it would rise, slow, and eventually fall gracefully to the ground. But if you could throw it hard enough, it could escape the moon’s gravity and continue its journey into the depths of space, forever.

Now, suppose that you released the ball without throwing it, and much to your surprise, it hovered in its original position, or rose slowly upwards. You would leap to the conclusion that some unseen force is at work – perhaps a clever trick with magnets. And what applies to ball bearings also applies to galaxies…

In 1917, Albert Einstein published his General Theory of Relativity. Mathematicians began asking what this new way of thinking about gravity meant for the universe as a whole. As with the steel ball and the moon, gravity is at work between any two galaxies in our universe. The distance between galaxies is very big, and the gravitational force they exert on each other is exceedingly weak – but given enough time, the gravity will have an effect. For cosmologists, who think in terms of billions of years, time is a plentiful resource!

When Einstein himself tried to apply his theory to the whole universe, he realised that, without the presence of some mysterious repulsive force, gravity would eventually cause all the galaxies in the universe would clump together (just as the steel ball falls to the moon’s surface). So Einstein suggested that the galaxies began as we see them now (the equivalent of the finger and thumb holding and releasing the ball at a particular level), and that some unknown force kept the galaxies hovering in that position (not magnetism, but what we now refer to as ‘dark energy’ – which is a technical scientific term meaning ‘we haven’t a clue what it really is’).

Enter Georges Lemaître, a Belgian Catholic priest born in Charleroi in 1894. Lemaître, a gifted mathematician, had seen military service in World War I – and missed out on a promotion for his annoying habit of correcting his superior’s ballistic calculations! After the war, he completed a Master’s in mathematics in one year. He was fast-tracked through a 3-year programme to become a priest, and was given special permission by Cardinal Mercier to continue his scientific studies at that time. After being ordained in 1923, he studied in Cambridge for a year, then went the USA to work on his doctorate at the Massachusetts Institute for Technology.

Lemaître realised that Einstein’s description of the universe wasn’t the only possible way of applying General Relativity. There were also solutions equivalent to throwing the steel ball in the air – some with it falling back, and others, sailing on for ever. Together with Cambridge’s Sir Arthur Eddington, he pondered a universe which looked almost static for a very long time (the finger and thumb holding the ball for as long as you like) but where the expansion eventually become significant (the ball must eventually be thrown upwards, but the swing begins in ultra-slow motion).

This Lemaître-Eddington model was published in 1927, in French, and not simply as a theory – Lemaître looked for observational confirmation of his ideas. A reliable means to estimate distances to other galaxies had only become available in 1925, but Lemaître was able to use data on 42 galaxies to estimate the rate at which the Universe was expanding around us. An English translation of the paper was published in 1931c – but with the observational results omitted.

In 1929, Edwin Hubble published his famous paper which drew the world’s attention to the fact that galaxies go faster, the further away they are from each other – now known to astronomers as the ‘Hubble Law’. As Hubble’s name became associated with this discovery, Lemaître did not protest: a humble man committed to

Poverty, he had given away the money he’d won as physics prizes and also seemed happy to give away his share of the fame.

Lemaître speculated further: If our universe was expanding now, then wasn’t it possible that it had begun in a totally contracted state? If this had been the case, the whole universe would have been as dense as the nucleus of an atom: in 1935, Lemaître speculated about a ‘Primeval Atom’ which decayed to create the universe we know.

In the 1940s and 50s, most physicists still believed that the universe was expanding because of the ‘dark energy’ term represented by Einstein’s mysterious force factor, and started out from something that looked very much like today’s universe. Lemaître’s idea of a primeval atom was a marginal alternative theory. A third contender, popular only in Britain, was the steady-state theory, which suggested that matter was continuously created to fill the gaps left when the universe expanded, causing the universe to look pretty much the same at all past and future times.

In a US radio broadcast in 1949, steady-state advocate Fred Hoyle disparaged Lemaître’s idea of an exploding primeval atom as nothing but a ‘Big Bang’ – and the nickname stuck! Today, we no longer speak of a ‘primeval atom’, and Georges Lemaître has been inexorably saddled with the title ‘Father of the Big Bang’.

Lemaître got a lot of things right. He predicted Hubble’s Law before Hubble did. He predicted that the universe began in a super-compact state, and that there would be measurable radiation left over from its initial expansion. He estimated the age of the universe as around 10 billion years – the latest results suggest 13-15 billion years, so he was in the right ballpark. Yet he was not infallible, and he spent much of his working life on radiation from space known as ‘cosmic rays’ which he thought were created as part of the Big Bang – we now know their origins are not so distant.

The Big Bang theory became firmly established once the evidence was in. Radiation from the edge of the cosmos? Check. Predictions of the mix of elements present in the early universe? Yes! Ability to run computer simulations of the early universe and arrive at what we might see today? Absolutely! In fact, the Big Bang was so successful that all talk of any mysterious ‘dark energy’ pervading the Universe was quietly dropped – not needed when the push from the initial Bang was enough to get the Universe to the size it is today.

In the 1990s, however, our ability to measure the distances to other galaxies was further refined. It became clear that, at great distances from the Earth, the expansion of the universe is in fact speeding up in ways that require ‘dark energy’ to be present. If this is so, we know how the Universe is likely to end – not with a bang, but with an ever decreasing whisper as it expands into an ever darker and colder void.

Among Georges Lemaître’s many achievements, two are outstanding – his 1927 discovery of what, in all justice, we should now call the Lemaître-Hubble Law of the expansion of the universe, and his 1931 paper in which the ‘Big Bang man’ dared to suggest, that despite the fact that God’s creative actions were well-hidden behind a veil of physics, the mathematics may require us to contemplate that the universe had a beginning in time, and that the universe we know today came into being in a razzmatazz of cosmic fireworks.

Revd Dr Gareth Leyshon is a Roman Catholic priest of the Archdiocese of Cardiff. He is currently parish priest on the eastern side of Cardiff City in Wales, and previously served as chaplain to the University of Glamorgan. Dr Leyshon read physics at Keble College Oxford and obtained his PhD from the University of Wales for research into dust clouds at the heart of active galaxies. He continues to enjoy speaking on topics linking science and religious faith.